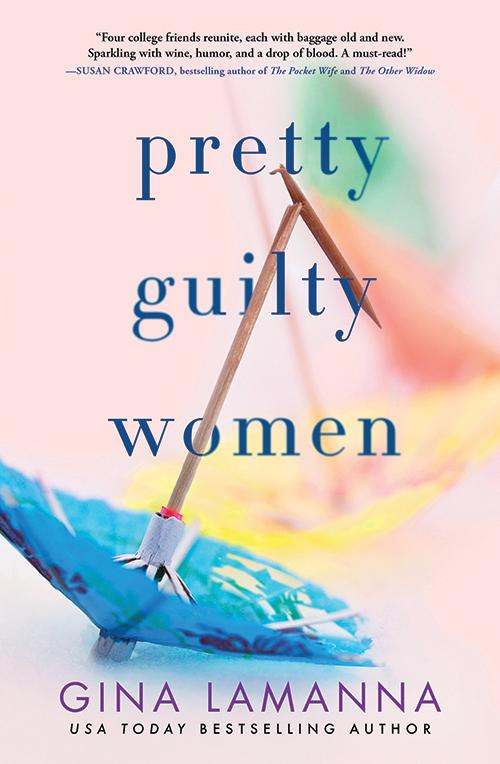 A review and author interview by Valerie Taylor posted on BookTrib.com

Curling up to read Pretty Guilty Women (Sourcebooks) by Gina LaManna is like grabbing a bowl of popcorn and settling in for a game of Clue® with your friends and family.

As the game begins, here’s what we know. It’s August. Friends and family are flying cross country to California to attend the lavish DeBleu/Banks wedding at the Serenity Spa & Resort, known for bubbling in relaxation, romance, and wellness. Yet, the night before the bride walks down the aisle, in an instant all of that peace and harmony collapse when the rehearsal dinner is rudely interrupted by screams.

A man is dead.

And that’s about all we know. We haven’t a clue where the body was found, who the deceased is, how he died…or why.

Have no fear. Detective Ramone arrives on the scene and, in turn, interrogates his prime suspects—four women who all claim to be guilty of the dastardly deed.

First up is Lulu. With five marriages under her belt, sixty-eight-year-old Lulu is a wealthy serial bride. After arriving for the weekend festivities in her fur coat, she bellies up to the Resort’s bar bemoaning the possibility of another divorce. In scenes reminiscent of when bar stools were for men only, Lulu greets three of the bride-to-be’s college roommates, who brought oodles of regrets and boatloads of baggage with them. And I don’t mean their luggage.

Next is Emily, who hates weddings and is content to drink her sorrows away. Contrary to Lulu, Emily has no sparkle. She lost it when her baby died ten years before. Under the influence, she tried to get a bit of it back when she hooked up with a stranger on the flight from Chicago.

Then there’s Kate. “Slick like Angelina Jolie in Tomb Raider,” generous Kate is intent on maxing out her boyfriend Max’s credit card as just revenge for his dumping her as they checked in at the front desk merely because she was ovulating.

And lastly is Ginger. While Emily and Kate want children, Ginger has her hands full with her three kids and her doting husband. She’s family-centric, always the worrier, forever the protector, especially when it comes to her rebellious teenage daughter, Elsie.

If four drama queens weren’t enough, Sydney shows up, perched on a bench in the lobby with a crying newborn on her lap. In due course, all the women, except Lulu who is childless and glad for it, go gaga over baby Lydia, sympathizing with her mother’s past and taking her under their motherly wings.

But they have a wedding rehearsal dinner to gussy up for and attend. And a dead body to explain. Holy Colonel Mustard, in the conservatory, with a candlestick! What’s a reader to do? Like most Nancy Drew-trained sleuths, I flip through the clues Gina has cleverly sprinkled throughout. Was it Lulu, Ginger, or Kate with a bottle of wine? Or was it Emily with a gun?

Time will tell. As the truth hangs suspiciously over these Pretty Guilty Women, they return home renewed and at peace, not because of the destination of the wedding but because of their journey once they arrived there.

On the surface, the novel appears to be a typical, yet intricate, whodunit. Underneath, Gina meticulously crafts subplots bestowing on each character their own unique raison d’être. In the process, the reader is bound to ask, “What are these pretty women guilty of?” Guaranteed, once you’ve closed the back cover, you’ll spend more time trying to solve this one than you would playing even a single game of Clue.

Crafting intriguing stories is nothing new for Gina, writing a murder mystery is. The following interview provides her insights into the subject.

Q.  What was the most challenging aspect of writing a multiple point-of-view novel? Did you ever consider having one of the women narrate it in its entirety?

Q.  The story is rich with themes, among them friendship, wealth disparity, marriage, abuse, honesty. Yet, you chose motherhood to predominate. Why?

Q.  In the novel, did you ever consider casting Detective Ramone as a woman? Would the investigation have proceeded differently if the detective were a mother?

Q.  You are a prolific writer across genres. How did your writing style change as you moved into Women’s Fiction? Why change genres now? What’s next?

Q.  What advice would you give authors who are contemplating tackling other genres?

Q.  I’ve read you have an imaginary dog. What breed is it, and what is its name?