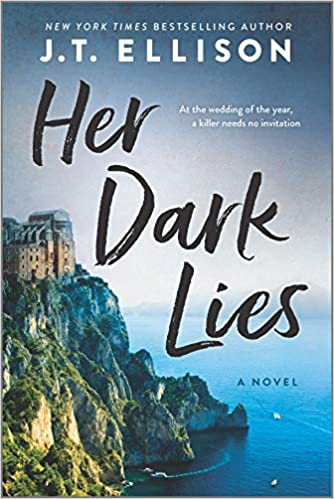 A review by Valerie Taylor (originally published on BookTrib.com)

Once again, in her newest thriller, Her Dark Lies (Mira), J. T. Ellison gives us a uniquely suspenseful tale, starting with an extraordinary overture to the reader.

As such, I’m tickled pink to tell you that Ellison invited me to the exclusive wedding of Claire Elizabeth Hunter and William Jackson Compton and, in turn, I’d like to invite you to come along with me as my plus-one.

When and where is it, you ask? She’s asked me not to share those details. But I’ll give you a hint. Dress to the nines, prepare for hot weather, and dust off your Italian dictionary.

Oh, what the heck, I’m so excited. Don’t tell anybody, please, except for the millions of Ellison fans who’ll just love this yarn.

So here’s the skinny. Claire and Jack will be married at Villa la Scogliera on a secluded island called, Isle Isole, off the Italian mainland! With its history dating back to the early Romans, this private Villa is stocked with modern art and supposedly generations-old family secrets. Perched on top of a mountain, the only way to ascend to the Villa is by navigating narrow paths and switchbacks that are harrowing and dangerous even when the weather is dry. On top of all that, some say the Villa is haunted. Maybe so, but it never scared away the likes of Ernest Hemingway or Picasso.

OMG! This is going to be the most incredible, to die for, destination wedding weekend ever!

You already know twenty-something Claire, an up and coming oil painter of exceedingly large canvas abstracts. While she loves Jack dearly, this marriage offers her an ulterior motive. She’s hoping Jack’s reputation and influence will pave the way to her success in the highly judgmental art world. Yet Claire is plagued with fears that he might cast her aside if he knew the extent of her lies and the past demons she keeps locked tighter than Fort Knox.

You say you googled Jack, the handsome eldest son of an illustrious computer magnate and brilliant business woman? Well, here’s some inside baseball about Jack you may not know. According to Ellison, he adores and dotes on his bride-to-be and will let nothing that’s happened in either of their past lives interfere with this wedding. Many marriages are made on little lies, wouldn’t you agree?

You say you also read that he’s a widower? True. But that’s so yesterday. Actually, his first wife died ten years ago. He’s so over Morgan, Claire seems to think, or at least she hopes.

Now, if only Claire and Jack can shake off the frightening home invasion by a masked man that occurred just before they left Nashville for Italy. And then if only Claire can get beyond the creepy Compton family she’s marrying into and the non-disclosure agreement she’s asked to sign, which seems to be as important as the marriage license. If only…things should go just fine.

Gosh darn. Wouldn’t you know? Now that we’ve landed and settled in on this idyllic island, a spell of bad weather has descended upon us, with a wretched forecast of thunderstorms, damaging winds, and lightning throughout the weekend. Looks like we could use some candles. I didn’t pack any, did you?

Not to gossip, but I’ve heard a rumor through the dark hallways that Claire’s wedding dress has been ruined. You’ve heard there was blood involved? No way! And what’s this about the skeletal remains of a hand being unearthed? And Claire found a cryptic note in the bathroom?

Feels so Alfred Hitchcock, doesn’t it? Before you know it there’ll be a murder. Or two, or…

Thank goodness there are bodyguards and guard dogs to prevent this wedding from going over a cliff. Thank goodness we have the exceptional storytelling talent of J. T. Ellison that compels us to hang on every word, flip every page, and gasp with shear reader-delight as we try to figure out who among the family, staff, and guests have dark lies, and why they’d wait until the wedding of the century to reveal them.

Can you see my two-thumbs up for the second book I’ve read by J. T. Ellison? Loving two books technically makes me a loyal fan, right? Moreover, I cordially invite you to read my December 2019 interview with the author and my review of Good Girls Lie (Mira).