Every Bone A Prayer 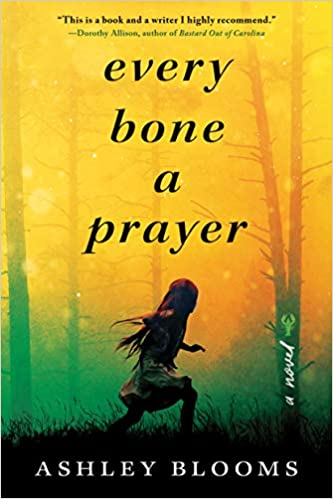 Dark, Fabulist Tale "Every Bone a Prayer" Summons Our Imaginations

Without a doubt, Ashley Blooms is a talented young writer. In her debut novel, Every Bone A Prayer (Sourcebooks Landmark), she gifts us a story so personal only she could write.

In her truly unique voice, Blooms quickly draws us in telling us, “Before a crawdad can grow it must shed the hard shell of its body.” And then she pays off this intriguing introduction by embedding the image of crawdads throughout the novel’s three sections: “Shift, Shed, Grow.”

In Shift, we enter the Appalachian world of Misty—a ten-year-old, living in a trailer with her older sister and parents, whom she suspects are on the verge of separating. Feeling small and unable to cope with her father’s departure, Misty embraces what she can handle. She speaks to the crawdads without opening her mouth, because “they shared her body with her and…helped her carry the weight of her thoughts…” And she offers her name to snakes, deer, and all things living in the creek, as well as to the garden in the holler that holds deep dark secrets of its own.

When a seemingly innocent childhood game of spin-the-bottle with the boy-next-door spirals into a series of unwanted sexual encounters in a neighbor’s barn, Misty is totally confused and loses all sense of herself.

In Shed, Misty displays her vulnerability, letting go of her body, just as crawdads do when their shells wither. She turns to the garden for help as she steps out of her own skin. Soon she feels nothing at all and becomes unrecognizable. Sadly, as she walks along the highway, “most people (think) of her as a road sign and (keep) driving.”

Finally, through her relationship with the garden, in Grow Misty shuns her negative self-image and discovers ways to heal and cope with her family and lot in life.

In “A Word from the Author” at the beginning of the novel, Blooms instinctively recognizes Every Bone A Prayer depicts “sexual abuse among children, domestic violence,” and other emotional situations that could trigger negative reactions from the reader. If that occurs, she suggests we take a pause and return at a later time. Though I did not consciously do that, I did take my time ingesting this complex story.

Similar to when I read (and enjoyed) One Hundred Years of Solitude (Harper) by Gabriel Garcia Marquez, Every Bone A Prayer required me to suspend all logic. By doing so, I was rewarded for having taken this journey with Misty.

Another gift from Blooms is the openness reflected in the interview below where she provides more insight into the creation of this remarkable piece of literature.

An interview with Ashley Blooms
In the introduction of your book, you give readers a heads up that the story contains issues some may find uncomfortable, triggering a disturbing memory or event. How did you come to the conclusion to add this trigger warning?

I knew that I wanted to include warnings since Every Bone A Prayer is a book that deals with trauma and consent, among other things. I felt a responsibility to my readers to be transparent about these issues. So the warnings aren’t designed to deter readers, they’re meant to welcome them into this book with informed consent.

I definitely drew upon my experience as someone with PTSD to create the letter and the detailed warnings on my website. For me, trigger warnings don’t often keep me from engaging with material altogether. More often, the warnings allow me to engage safely. For example, I watched Game of Thrones for a while even though it seemed to revel in violence, including sexual violence. So I never watched an episode live. I waited until my sister watched it, and then she would tell me if there was anything I could look out for. Often she would say something like “(description of something potentially triggering) happens right after the scene where Jon looks broodingly out the window.” And when I got to the scene where Jon broods, I would just skip ahead or have my partner skip ahead while I left the room. Then I’d come back and finish the episode. I knew what happened, I just didn’t need to see it happen.

In this way I am lucky to have people in my life who hold me tenderly. Who understand the ways in which I have been hurt, who I trust deeply, and who do their best to help me exist without being needlessly hurt. I don’t want to miss out on the world. I don’t want to look away from art that is being created. It is not my goal to avoid being uncomfortable. It is my goal to be healthy, to take my needs seriously, and to treat myself with kindness and respect.

That’s why I included the letter in my book and the more detailed warnings on my website. I want my readers to be able to make that same kind of choice for themselves. I want them to be healthy, to have their needs taken seriously, and I want to treat them with kindness and respect.

Amazon categorizes the book as magical realism, which made me wonder: how would you categorize your writing?

I consider my work as belonging more to fabulism or slipstream than magical realism due to the latter’s history. It’s my understanding that literary magical realism was originated by Latin American authors who often used the genre as a tool of subversion against colonization. I don’t share that background, so magical realism doesn’t feel like the appropriate genre, although others might disagree.

I was certainly inspired by Gabriel Garcia Marquez, Isabel Allende, Salman Rushdie, Kelly Link, Louise Erdrich, Olga Tokarczuk, and others whose work tends to blend the fantastical with the everyday. It’s hard for me to imagine writing a book that didn’t include something strange or surreal. It’s part of how I see the world, and these are the kind of stories that make me excited, that inspire me as a writer. I hope I’ll be sharing that with readers for a long time.

Clearly you have an active imagination. How did that come to be?

There are a lot of people and things that could claim some credit for that: my mom, my Papaw who used to sit with me on the porch swing and listen to me tell tall tales, my elementary school librarian (hi Mrs. Gross!) who was always encouraging me to check out new and more challenging books, all the movies and television shows I was probably too young to watch at the time, my friends and siblings for putting up with my wild ideas, the Appalachian Mountains for providing so many things to be fascinated with and terrified by, the Book Mobile and Scholastic Book Fair, the Goosebumps tent I practically lived in for a couple years. I was a kid who grew up in a geographically isolated place surrounded by oral storytellers (though my family probably never saw themselves as such). It seems impossible sometimes that I could have been anything else but a writer.

What challenges did you face writing the scenes where Misty sheds her skin?

I think the biggest challenge was the first transformation. It was a moment that I didn’t actually want to seed too much in the earlier story. I didn’t want any flashing signs pointing in that direction, but I also wanted it to feel inevitable after it happened. I wanted surprise, curiosity, horror. I wanted Misty’s choice to make sense based on who she was and what was happening to her and where she lived. I’m not sure that I achieved all that, but it was definitely the most difficult challenge. Writing the scenes in her bones, coming up with the rules and parameters of her altered body, exploring how such an experience would affect her—that was some of the most natural and exciting writing that I did throughout the whole book.

Crawdads seem to be a big draw these days! How did the crawdads come to be in Every Bone A Prayer?

Honestly, crawdads are some of the world’s most underrated animals, and I’m glad they’re having a moment, at least in fiction. As someone who grew up playing in the creek and catching crawdads in buckets, it was easy for me to imagine a bond between them and my novel’s protagonist, Misty. And their role in Every Bone A Prayer is central not just to Misty’s story, but to the structure of the novel itself. It was from the molting pattern of crawdads that my agent and I came up with the three-part structure of the book: shift, shed, grow. I can’t imagine the book without them.