Let me just put it out there. I don’t drink coffee, and I hadn’t a clue what cold brew was when I started reading Cold Brew Corpse (Crooked Lane Books) by Tara Lush. Given the title, I assumed tainted coffee was killing people in some cozy town. If so, as the reader, my mission, if I chose to accept it, would be to figure out who was poisoning the brew and why, and perhaps to suss out who would be the next potential victim in the process. 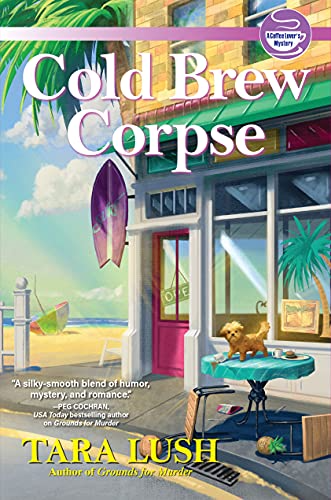 With my best Agatha Christie antenna raised, I cozied up with a mug of hot brewed chamomile mango herbal tea in hand.

That Cold Brew Corpse is set in the sunny Gulf Coast of Florida in a town called Devil’s Beach was the first clue that something other than the coffee was rotten. Second clue: who opens a hot yoga studio named Dante’s Inferno next door to a coffee shop affectionately called Perkatory? To be honest, consuming any beverage above ice water temperature was the last thing on my mind the one and only time I exposed my body to hot yoga.

Nevertheless, the co-existence of these two enterprises in the same strip mall worked for Lana Lewis, owner of Perkatory, especially after the owner of the yoga studio disappears without even ordering a sugar-free vanilla latte to go. Though she tried to tend to her own fiasco—an unexplained bad batch of cold brew—Lana’s prior career as a reporter lured her into adding sleuth to her resume.

When the yoga studio owner is found not quite six feet under in a swamp, Lana’s list of potential suspects from both the studio and coffee shop serves to monopolize the time she’d rather spend with Stanley and Noah. One is her golden Shih Tzu puppy, the other is the chief of police. Both are loveable. You’ll need to do your own investigative reporting to find out who’s who.

With her father, co-workers, and friends as her supporting cast in trying to solve this case, Lana learns to trust her own instincts, except when it comes to joining a yoga class already in progress.

I’m happy to admit my initial assumption about Cold Brew Corpse was off the mark. Moreover, I don’t need a jolt of high-octane caffeine (hot or cold) to open my eyes to a well-conceived mystery when I read one. Just as I learned cold brew is created by a slow, steady process, Tara crafts a story that simmers until it gradually reaches its boiling point of perfection, with a shot of sugar and spice added for good measure.

Though Cold Brew Corpse is my first taste of a Tara Lush mystery, you can bet your next cup of morning joe that I’ll be back for a refill soon.

This review was originally published on BookTrib.com.