Nov 14, 2021 by Valerie Taylor, in My Blog
Since publishing The Fourteenth of September (She Writes Press, 2018), Rita Dragonette has solidified her reputation as an award-winning author. It’s no wonder since “her debut novel is based on her personal experiences on campus during the Vietnam War.” Clearly, she takes the saying, “write what you know,” to its highest possible meaning. 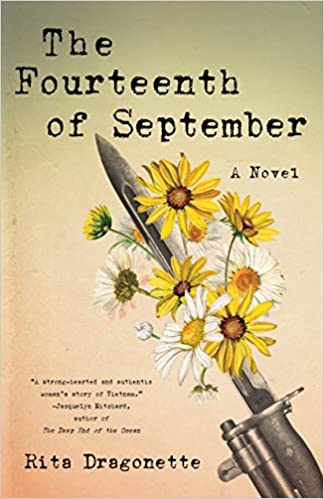 Amazingly, Rita is currently working on not just one, but three, other books. So, I’m honored she agreed to participate in my research project that culminated in a guest blog entitled, Better Later than Never, which focuses on nine writers who published their first books after age 60. Because the blog only provided space for a single paragraph for each author, I offer my full interview with Rita here.

The Fourteenth of September portrays a pivotal time at the peak of the Vietnam War through the rare perspective of Judy Talton, a young woman, tracing her path of self-discovery and a “Coming of Conscience.” Judy’s story speaks to the poignant clash of young adulthood, early feminism, and war, offering an ageless inquiry into the domestic politics of protest when the world stops making sense.

Q. What was the biggest challenge you faced in creating your first novel after you were 60?
A.  Making my topic, or the era of my topic, of interest/relevant (this was before Black Lives Matter). This is the reason the book finally landed as historical fiction. Though it's technically on the cusp of the definition, it isn't "old" enough to have the nostalgia we attribute to WWII or times before.

Instead, Vietnam is still the Voldemort of wars, and emotions around it are negative, which impacts interest—readers often assume it's a painful slog. To this day, it's often assumed its only audience would be a woman of an age to be of the time it covers (1969-1970).  This is despite the fact that, at its core, the novel is simply a coming of age story of a teenager during wartime who is forced to make a decision of conscience.

Stories like this, set in other timeframes, are thought of as inspiring and heroic. They are read avidly. The current new crop of Vietnam-centered stories (i.e., The Sympathizer, Viet Thanh Nguyen, Grove Press, 2015) are very male-oriented and, as a result, attract a wider reading audience. The issue of the off-putting setting as a problem that persists (i.e., women of an age can't talk their daughters into reading it) is troubling.

The Black Lives Matter movement makes the complexity of protest as a topic more of interest (a major theme of the book), but it's still a slog.

These issues also have an impact on my positioning as an author. I don't fit into any diverse categories (the subject of long convos with publicists); and my subject, and therefore age, can keep me from being perceived as relevant, unless I'm blogging or essay-writing about protesting.

All this is a huge challenge. The book has done well (for a debut independent), but it's often sale by sale. Note: the issue is gone once the book is read. I am getting a lot of reviews and messages from people who bought it at launch and are reading it now and pleasantly—often exuberantly—surprised.

Q. Why did it take until 60+ to write the novel?
A. Time. I had planned it as a series of linked stories (before we had that term) like Winesburg, Ohio upon graduation from college in 1972. I remember a classmate wrote me after to say there was a story in those years, and I was the one to tell it.

I felt that as an obligation. I also felt that I couldn't write anything until I finished this topic. When I entered the public relations field (at the time a "writing" profession), it satisfied my creative urge, and I was surprisingly good at it, as well as the business side; so I excelled as an executive at a global agency, then in my own. This career turn left no time for writing.

Once I sold the agency, planning to work on the novel part-time and do consulting, the consulting portion grew like crazy, and I was relegated to novel writing only at residencies over a ten-year period. Once the manuscript was accepted by my publisher, I folded the consulting company, realizing that the only way this writing career would work is if I was devoted to it full time.

Q. What in your personal experience/career made its way into your story?
A. They say your first book is about you, and this is correct. The Fourteenth of September is based on events that happened while I was on campus during the period of the Draft Lottery and Kent State. I remember telling a writing instructor years ago that I had to develop a dilemma for Judy, my protagonist, that was as wrenching as what I'd gone through in considering giving up my Army scholarship during the time. He looked at me like I had two heads and said, “You'll never invent anything as compelling. It's your life, your material. Of course, you should use it. "

This was challenging when you realize that actual events are never quite as dramatic as your narrative arc requires. And, that you get stuck in what "really" happened. I was in the bottom of the ninth of a month-long residency early on when I finally learned to release reality and embrace that this was fiction, and I could do whatever I wanted (as long as the history was right).

That said, there were still memoir-like issues. For example, I could never have published this while my mother was alive. She would have seen herself even in Judy's fictional mother. At the end of the day, I was hoping my brother would read it and learn some things about the family dynamics of the time. Alas, he is an engineer who does not read recreationally. I think he only made it through the first chapter.

Q. If you could change anything about your writing life, what would it be and why?
A. First: I actually continue to struggle with setting a schedule. I'm convinced that three hours a day, early in the morning (which was always my shank time during my professional career. It's when I'd write proposals, articles, etc.) is what it would take. And yet, this has been hard to manage. It's actually embarrassing that I haven't been able to conquer this.

Second: I must say that it's daunting to change careers and have to continually re-credential yourself. It helps tremendously to have a published book. To have more than one (second novel halfway done) will be a big affirmation that I'm here to stay and have something significant to contribute.

Q. What advice would you give to aspiring authors?
A. It's always the same. There is no reason to go it alone. I knew that when I began I didn't have a lot of years left to write books on my own, teaching myself how to do it, while early attempts were hidden away in drawers. I signed up for classes at the University of Chicago during the last months before I sold my agency. Soon, I was accepted into their first cohort for a certificate program. That gave me instant community—with peers, as well as access to published writers. It was one of those instructors who introduced me into the residency world where I met so many incredibly accomplished writers who were so generous about introducing me into their own communities. In every location, there are many online options, but also live. It has become very easy to join a community and those associations will help you master your craft, as well as help the publishing industry to take you more seriously upon entry.

Q. Any final thoughts about the topic of writers publishing for the first time later in life?
A. Don't take anything for granted. I had been a long-time executive in public relations, and I initially felt that my publisher and publicist would deal with me as I had my clients. Conversely, because of my background, my publisher and publicist assumed I would magically understand everything. We got into a lot of  "what do you want ...?" and I would respond with..."what do you recommend?"

It threw me to discover in the middle of the tension of publication that my assumptions, and what the industry offers to writers, were at a different level. Handing you a manual or a proposal template is not always sufficient. I don't mean to be negative, but it took me a while (as a 30-year marketing professional at leading organizations) to understand that the services are geared to writers—who typically have limited resources—vs what might be required in a full out blitz for one of my clients. I even offered to pay more and there was nothing more available. It was a sobering early experience and feathers were ruffled on both ends trying to adapt.

I'd recommend a dedicated discussion about expectations/assumptions and, above all, your role as the writer of a book to be published and marketed. I'd also recommend you have as many conversations with published writers along the lines of, "what I would have done differently had I known."

The important thing to remember is to try to see the publication process as a great adventure and don't let any issues cloud your dream. You shouldn't have to be anxious. If you are, have a discussion. Keep your eye on the prize.

Available everywhere as a paperback, eBook, and audiobook. For your convenience, here is one link.