Truths I Never Told You 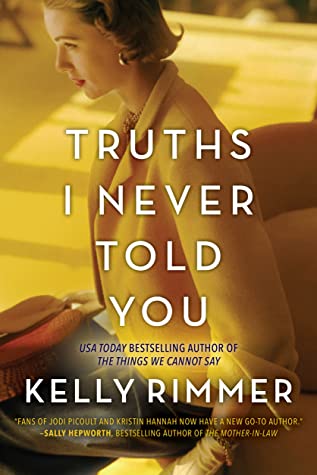 No matter what your age, you’ll have an emotional reaction to Truths I Never Told You (Graydon House) by Kelly Rimmer. This stirring story spans five decades, from the 1950s to the 1990s, addressing a myriad of common family and societal issues that have touched most of us at one time or another.

When Beth Walsh’s father enters an assisted living facility as his dementia deepens and his health fails, she and her three siblings must clean out his house. Because she’s on maternity leave, Beth volunteers to do much of the heavy lifting; that is, until it’s time to tackle the attic.

Beth and her sister have the dead-bolted attic door totally removed. Expecting to walk into their father’s pristine art studio, they’re shocked to discover a junk room filled from floor to rafters with “piles of papers and candy wrappers and discarded items of clothing, dirty bowls and soda cans.”

Scattered among the dust and moldy smelling trash are her father’s abstract paintings…and family secrets waiting to be revealed. Still convinced she could handle the de-cluttering project herself, Beth painstakingly sorts through the morass, discovering notes in what she believes is the handwriting of her mother who had died when Beth was very young.

Together, the artwork and the letters create an unrecognizable and unsettling portrait of Beth’s parents—a portrait she’s driven by her own struggle with motherhood to decipher.

Through three points of view and multiple sub-plots, Rimmer creates a fast-paced intergenerational tale. The rapidity of the narrative, especially the letters, builds suspense as the reader tries to solve this mystery.

Further, Rimmer’s female characters, especially, are fully formed as they honestly confront the multiple barriers society has imposed on women for many years. As such, it would be easy to characterize Truths I Never Told You as a woman’s story. But is it? I’ll never tell.

Interview with Kelly Rimmer, Truths I Never Told You

Why did you choose to set the story in Seattle?

Toward the end of the book, there’s a reference to a specific referendum held in Washington state in 1970. I won’t go into detail about what the referendum related to as it’s a plot spoiler; however, this was a key part of my inspiration for this book, so it seemed natural to set the rest of the story there, too.

I always write from a detailed outline; however, my writing process is a little chaotic. In the case of this book, I knew exactly how each narrative thread would unfold and loosely where the breaks would be between each time period. I do start writing from the beginning, but I tend to jump all over the place, writing around any scene that doesn’t immediately flow; and, of course, returning to those scenes later.

Your characters are embroiled in addressing how society views at least nine issues—from post-partum depression, dysfunctional families, to women’s rights to name just a few. Why tackle so many?

I love to write about women’s lives, and how we live out our lives in the context of a society and a culture. These issues, both in the 1950s and today, are critical for women, and they are more related than some might think. I also do believe it would have been impossible for me to write a realistic story about a young mother in the 1950s without covering some of these critical issues.

You are too young to remember how constrained women were in the 1950s and 60s, yet you nailed it. What research did you do to be able to portray this time period so precisely?

I’m so grateful to live in an era where information is so easy to access! In addition to broadly reading about that period, I had conversations with older women in my life and listened to hundreds of hours of podcasts, focusing on oral histories from the era. Real-life stories are powerful. Hearing women speak directly about their experiences gave me a wealth of detail and emotion to work with, and I’m so grateful for that.